So you’re just getting started with your Vitamix and that’s awesome. I gotta tell you a few things, a few mistakes that new Vitamix owners, beginners make all the time.

First of all you might think that your machine is defective. 99.5% of these machines don’t get sent in for service. So one half of one percent of these machines ever get warranty claims. So your machine is probably not defective. Chances are, you need to add a little more liquid; so respect the ratio. So half liquid, half solid. Or, loading order. So make sure that you add liquid ingredients first. Fleshy fruits, greens in the middle, and then frozen stuff. Ice, frozen fruit last.

Also I know you’re really excited and you probably got Vitamix to make all things: Smoothies, juices, nut butters, hummus, ice cream, hot soup, flours, batters, chopping. All the things. You’re going to have this thing for a lot of years. Go slowly. Oh don’t put it away. Keep it on the counter! It’s going to be a reminder that it needs to be used. Feed it. Put things in it, and use it as a tool to achieve your goals and to get better. Leave it on the counter.

Ok last one if you fail, if you make a brown smoothie, you can’t figure out how to make nut butters, if your soup is not as hot as you expect it to be, if you don’t use it as much as you had hoped, if you fail, it doesn’t mean that you are a failure. 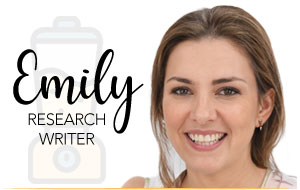 I'm Emily Adams, Boston-based research writer and article editor. My work has appeared in USA Today, Motherboard and the Huffington Post, among others. I enjoys cooking and experimenting with fusion recipies.

At NiftyBlender i am presentinag unbiased reviews of Best Blenders that i have used and found very competitive for everyday kitchen working.

NiftyBlender is a product review based blog that publishes well researched, in-depth reviews, buying guide and tips on the best blenders available in the marked.

NiftyBlender.com is a participant in the Amazon Services LLC Associates Program, an affiliate advertising program designed to provide a means for sites to earn advertising fees by advertising and linking to amazon.com